One more interesting construction from the Sunday ride

This Sunday there were actually two main points of interest on the planned route, not just the streams crossing. This time the structure combines timber with steel fasteners. It's a observation tower called Bohdanka located in village Bohdaneč (Czech Republic). Unfortunatelly the tower was closed (should be opened from next week) nevertheless the magnificent view was provided even from ground level. So just three pictures for your imagination:

Today me and my friend visited quite unique place. The crossing of two streams in different level. I've seen some TV program about this place because it had been restored about two years ago. Just to let you know about the meaning or sense of this structure: the upper stream was used as a millrun in the past. So you can see few pictures of this certainly interesting structure right here in this post:

Hello, I am glad that I can announce that from now on I am running on my own domain name (GSrider.net). So you don't need to spend eternity with typing the whole old address bmw-gs-rider.blogspot.com (but this one works as well). 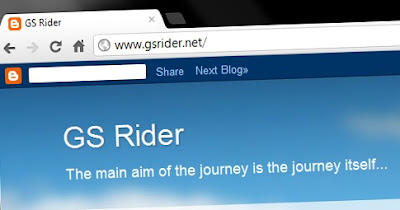 Reinforcement of sun visor on my UVEX helmet

Uvex company re-designed the original sun visor on their Enduro helmets for some reason. It is much thinner and what is worse it's much weaker - mainly in torsion. So sometimes the wind causes squeaking by small torsion of the sun visor and by small rotation in its three supporting points. So I decided that I will reinforce it with some fibre glass. I've used very fine (110g/m²) glass fabric, polyester resin, sprayed filler, black color sprays, some sandpaper and that's basicly all. So the result is that the visor is stiffer (not as much as I wished to, but it's pretty ok). I was quite limited by space on the bottom side of sun visor because there is almost no space between the sun visor and the plexiglass when it's fully opened, so I couldnt use as many layers as wanted. Well, there are some pictures:
Posted by GS Rider at 9:03 PM

About me
Video archive
Guestbook